Keyboard issues with GNOME on a PowerBook G4 running OpenBSD

While setting up OpenBSD on my PowerBook, I ran across a problem with GNOME. My mouse would work fine but the moment I tried to type something, key presses would not register and mouse clicks would no longer work. The caps lock lights still worked and I could ssh to the machine so it was not locked up. Restarting X with Ctrl-Alt-Backspace seemed to be the only way out. The problem was the same if GNOME was started from GDM or from startx. FVWM from startx worked fine, so it wasn't a hardware issue.
After much searching I finally stumbled upon a thread from OpenBSD's misc@ email list that matched my problem:
OpenBSD 4.6, powerpc, KDE, Gnome, XFCE play nicely?
The next email in the thread mentioned problems with XDM, and I too was also experiencing problems with GDM.
The third email pointed me to the right location for the solution, "the second parapgraph of /usr/X11R6/README" which states:

To use xdm from rc.conf, it is necessary to disable /dev/ttyC0 in
/etc/ttys, change the 'status' of /dev/ttyC0 to 'off'.

I remember seeing this when I initially set up X but unfortunately I didn't follow the directions (maybe because I was having the problem from startx as well as GDM). Disabling /dev/ttyC0 and rebooting solved the issue.
at August 30, 2010 3 comments:

Here are some tips on getting a Drobo (tested with a 1st Generation Drobo) working with an Asus RT-N16 running DD-WRT.

First off, BACKUP your data on the Drobo. You'll probably need to change the partitions and reformat your Drobo.

It looks like DD-WRT 24 does not support GUID Partition Tables (GPT) which means you need to use a MBR partition table and you LUN size will be limited to 2TB. This was not really a problem in my case since the 1st Generation Drobo is restricted to a 2TB LUN.

I think the standard Drobo tools will use a GPT. To check if your Drobo has a GPT just run fdisk on the drobo

Did you BACKUP your Drobo?

To remove the GPT, erase the first and last sectors:

Now create a new partition on the Drobo with fdisk, then format the partition as ext3 as described on the DataRobotics website (skip the GPT part).

Next up (hopefully) is a C program that will report the Drobo's status. I needed to write a C program because unfortunately the excellent drobo-utils is written in Python and Python needs more space than is available on a router. I also didn't want to install Python to external storage attached to the router, because if that storage fails, then there would be no way to determine the status of the Drobo.
at August 19, 2010 No comments:

During my recent forays into web development I'm learning about using other fonts. It seems that Web Open Font Format (WOFF) may be the way to incorporate a font on a web page.
Support for WOFF:
Existing TrueType/OpenType fonts can be converted to WOFF with these programs. Arch Linux users can install these programs using my AUR package.
at February 25, 2010 No comments:

A reader pointed out that my Label Sphere wasn't working as advertised. I took a look at both our blogs and they both looked fine, then I realized it must be a browser issue. I looked again with Firefox and sure enough the labels were all stacked on each other at the bottom of the gadget. I made the mistake of only testing in one browser (Google Chrome).
The issue with Firefox was that the label container was collapsing, then JavaScript got a very small height for the container which resulted in a very small sphere. To keep the container from collapsing I added the following to the style of the container (as stated in the link):
overflow: hidden;
width: 100%;
For the sake of completeness I checked the Label Sphere using IE8 on my gf's computer (the only IE I can get on Arch Linux is IE6 and I've decided I don't want to support IE6) and sure enough IE8 had a JavaScript error about "Object doesn't support this property or method". This error occurred while trying to set the a:link and a:visited colors to the current blogs theme. IE8 doesn't support setting :visited in JavaScript. It's also been documented that IE7 needs both :visited and :link (eg a:link:visited) but I'm not sure if that's related. A simple try around the :link and :visited lines with an empty catch worked around this problem. The only downside is that a blog's visitors using IE8 won't see the blog's link and visited color scheme in the Label Sphere.
One other thing I noticed is that the Label Sphere moved smoothly and quickly in Google Chrome, probably because of their V8 JavaScript Engine. Firefox and IE were slower and stuttered a little.
So for anyone using IE6 (or any other outdated browser) it's time you upgrade! And if you aren't using Google Chrome you should give it a try.
at February 19, 2010 32 comments:

My first project with Google App Engine was a Google Map that displayed temperature data for a given date. I used monthly grid data provided by NOAA. With this data the Earth is divided up into 5x5 degree grids for a total of 2592 grids. I wrote a simple Perl script to parse the NOAA data, find the min and max temperatures, generalize each temperature point into a scale of 1 (min) to 9 (max), calculate the latitude and longitude for each corner of the grid, and write a CSV file suitable for upload to the datastore.
For the backend I wrote a Python script that created a kml of the data for the requested date. In the kml, each temperature range is a separate Placemark, and within each Placemark are GPolygons representing the grid data.
The frontend used JavaScript and jQuery to load the kml as a GGeoXml. There was also a play button that steps through all the available dates.
Unfortunately only 1 GPolygon for each Placemark would load. So I re-wrote the Perl script to output encoded polylines instead of latitude, longitude coordinates. I also wrote a Perl modulino (ISC License) to convert a set of coordinates to an encoded polyline string.
The backend was rewritten to output the data in JSON instead of a kml.
The frontend was rewritten to create GPolygons using the encoded polylines.
This time all the polygons were created correctly. The first date I tested was 1880-01 with around 200 temperature grids. With this many grids, the tab running my map consumed over 300MB of memory. Therefore, I didn't even try loading the most recent date, as it probably had over 2000 temperature grids. My conclusion from this project is that only a few polygons can be created on a Google Map. Here is a screenshot of the application. Note that the date range is only from 1880-01 to 1880-11 so the temperature range is quite small. 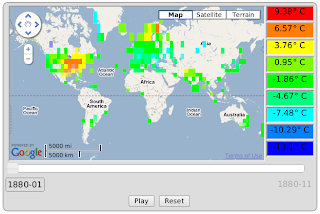 My first Google Gadget is at the top of the left column of my blog. I've seen label clouds around and they all used flash so I decided to write one in JavaScript. I figured it would be a good learning experience. This gadget uses JavaScript and jQuery to rotate divs around a single point. Depth is represented by changing the font size and opacity. You can add my gadget to your blogger layout by adding a new gadget and searching for either "Alex Dioso" or "Label Sphere".

I recently started using Google App Engine and I have to say that I like it. The only thing I would change is support for other languages, namely Perl. I don't mind learning Python, but since I already know Perl it would be nice to be able to use it.

If anyone else is interested in using Perl on Google App Engine please Star issue #34 (do not reply to the issue with a "me too" or "+1", it just clutters everyone's inbox). You'll have to be logged into your Google account to do this.
There is also a Google Code project working on getting Perl ready for use in Google App Engine.
at January 25, 2010 No comments:

I've been trying to write my Perl scripts as modulinos (described in Mastering Perl), the basic idea being that runnable scripts written as modules can be used by later scripts. So far it has been working out well.

The ISC License that I use for some of my Perl scripts: isc_license.pl
at January 22, 2010 No comments:

(Note that there are control characters in the last few lines)
at January 22, 2010 No comments:

To find all unread tasks (eg: all unread waves) use the following search:
is:unread
Project management with Google Wave
at January 09, 2010 No comments:

Finding tasks that don't have a project

I recently got an account on Google Wave and I think it has promise. What interests me most is the possibility for project management. Previously I was using ThinkingRock which is a great application and has tons of features. However I didn't use most of the features and I wanted to share projects, to-do lists, etc with other people. I then started to move my projects to Google Tasks with hopes that it would allow sharing similar to Google Calendar's sharing.

My setup is as follows:
That's all I'm using Google Wave for right now. I'll provide updates for any new processes I come up with.
Some notes about searching:
at January 02, 2010 No comments:

PreferenceKey has a few quirks that have tripped me up. One is the reduce(value:nextValue:) implementation. The other is that a PreferenceKe...